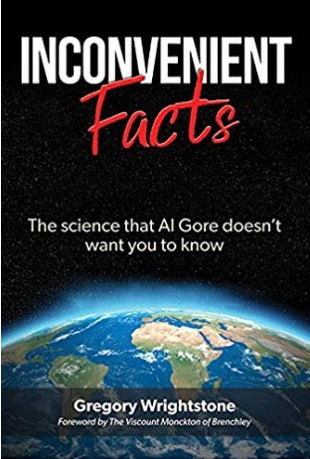 Other than by misspelling “fjord,” how would an American geologist draw the ire of a pair of Norwegian politicians?  Answer: Write a book that counters the notion that human activity is causing the globe to warm with catastrophic consequences.

Gregory Wrightstone’s 2017 book, Inconvenient Facts: The Science that Al Gore Doesn’t Want You to Know, was published in Norway and is being promoted by the Climate Realists, a Norwegian organization, which shares the author’s view that modern warming is neither unusual nor unprecedented.

Backed with 90 illustrations and 15 pages of references, the book presents 60 footnoted facts inconvenient to the Western elite’s absurd narrative about global warming.  Among them: Most of the last 10,000 years have been warmer than today, including the Medieval Warm Period, when Vikings raised barley on Greenland, and the Roman Warm Period, when citrus grew in northern England.

After the Climate Realists announced plans to distribute the book to all 356 of Norway’s mayors, two members of Norway’s unicameral Stortinget — Tom-Christer Nilsen and Lene Westgaard-Halle — wrote the mayors a letter discouraging them from accepting a book that is popular “because lies are more entertaining” than the truth.